The original French tutorials include many vocabulary words, sample phrases, and grammatical rules, with free audio files, flashcards, and exercises. Use the links below to jump to a certain section, or start with Basic French Phrases.

For more French learning through authentic videos, I recommend Yabla French and FluentU. For audiobooks and lessons of modern French, try French Today. I've recommended some French books at Amazon, and Interlinear books are great for learning French by reading literal translations in English. Need even more French? Try the French courses at Udemy 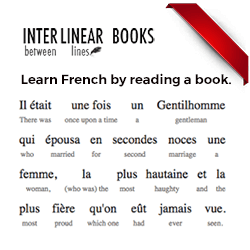 Only available in PDF e-book:

For the vocabulary lists, I am making audio flashcards [French to English and English to French] with a flash mp3 player in each "card" so you can listen to the pronunciation of the words as you study. The flashcards will open in a new window and you simply click => to go on to the next set of flashcards or to continue on to the exercises.

The exercises can be matching, multiple choice or fill in the blank and they will also open in a new window.

After certain sections, the Real French icon will direct you to accompanying audio files to help you improve your comprehension of spoken French with the French Listening Resources mp3s and exercises.

I am slowly changing over the pronunciation guides to standard International Phonetic Alphabet symbols, but Internet Explorer has some spacing issues with the symbols. I recommend using Mozilla Firefox or Google Chrome to view this site.

There are many more countries and regions around the world that speak French instead of just France, Quebec, Belgium and Switzerland, but those are the only dialects that appear on this site for now so that is why only those four flags are shown at the top of the page.

Recommendations. Language textbooks are rather expensive and generally only include the formal, written language. You will need more exposure to the real spoken language if you want to become fluent.

Please consider sending a donation of any amount to help support ielanguages.com. Thank you!

Return to top of page

FluentU offers authentic videos in French, Spanish, German, English, Chinese and Japanese. Learn from captions and translations and enjoy access to ALL languages!