The most entertaining way to learn Spanish

It’s quite easy and fun to learn Spanish by watching telenovelas, fast-paced Spanish-language soap operas that are as ridiculous as they are addictive. Armed with closed captioning, Wordreference, and a few other websites, you can easily learn or improve your Spanish while love/hate-watching soap operas.

Most of the telenovelas I watch are Mexican or American, since I’m most familiar with the telenovelas broadcast on the US channels Univision and Telemundo. Many other Spanish-speaking countries produce their own telenovelas that you may be able to find on DVD, Youtube, Dailymotion, Viki, etc. However, you are less likely to be able to find closed captioning or subtitles in Spanish and the DVD versions will almost always be edited versions since most telenovelas run for over 100 episodes and that would fill a LOT of DVDs.

The good thing about Univision and Telemundo is that you do not need a cable subscription to watch their telenovelas since you can stream them online if you live in the US or use a VPN to seem like you are in the US. If you do watch on a TV, you should be able to turn on the closed captioning in either Spanish or English – if your TV has the option to change to English, that is. Closed captioning in Spanish is available for the streaming videos, though Univision’s is somewhat unreliable. The site Ark TV also has what appears to be (mostly messy and unreliable) text of the closed captioning for the Univision telenovelas up to September 10, 2015. If you want English language recaps of the four main Univision telenovelas and some discussions of the Telemundo telenovelas, head over to the blog Caray, Caray! so you’ll still be able to follow along with the plot even if you miss or can’t understand some episodes.

There are four telenovelas broadcast every weeknight on Univision, but I don’t have time to watch all of them. I started with Lo Imperdonable (The Unforgiveable) since the scenery is really pretty and I liked the juxtaposition of big city and small town. Some parts were filmed in the Mexican state of San Luis Potosí near the gorgeous Tamul waterfall. Also, Ana Brenda and Ivan Sanchez make the hottest couple ever.

These people are too pretty to be real.

I have an intense love/hate relationship with this telenovela because there are quite a few things that piss me off about the storylines, like “Hey, I just met you and this is crazy but I think you’re responsible for my brother’s suicide so marry me maybe (so I can treat you like crap),” slut-shaming of adult women who may or may not be virgins (who cares?!), and the child abuse of a 17 year old girl. The most offensive thing about this telenovela may just be the horribly miscast 48 year-old Sergio Sendel in a role where the character is supposedly in his late 20’s. Yet I cannot stop watching! 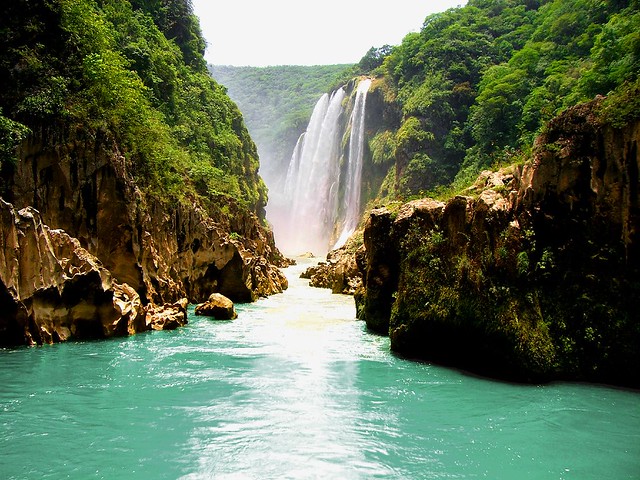 Yes, this is a real place in Mexico.

The other Univision telenovelas that I catch from time to time are:

Muchacha italiana viene a casarse (Italian girl comes to get married) – If you like Italy and want to learn a tiny bit of Italian with Spanish, check out this telenovela that has already aired in Mexico but started in the US last month. There are a whopping 176 episodes overall, but Univision is cutting out a lot of scenes for the US broadcast in order to shorten it. Two of the main characters are Italian and frequently code-switch between Italian and Spanish, so it can be a tiny bit confusing for beginning Spanish learners.

Antes Muerta que Lichita (I’d rather be dead than be Lichita) – If comedies are more your thing, I’d check out this adorable telenovela. Supposedly, it is NOT an Ugly Betty remake but there are quite a few similarities so far. Comedies tend to have much faster speech, however, with more slang and informal language so even with closed captioning, I have trouble following some conversations. There is also a hilarious telenovela-within-a-telenovela that basically exists to makes fun of telenovelas, available only on Univision’s website, called Corazón Enamorado. There are no subtitles for this webnovela though, and the main character speaks with an American accent, which you’d think would make it easier for English speakers to understand her Spanish but I actually find it harder.

Totally not Ugly Betty, you guys…

Some telenovelas that recently ended are still available on Univision’s website if you feel like binge-watching 100 hours or more. You can also buy edited version of telenovelas on DVD (usually between 12 and 15 hours total), but they only come with English subtitles. But at least you don’t have to sit through the filler scenes with minor characters that you don’t care about!

I mostly watch comedies, so I definitely recommend Pour Ella Soy Eva, Los Tontas No Van al Cielo, and La Fea Más Bella (the Mexican Ugly Betty) – which coincidentally all star Jaime Camil as the male lead. (You should also check out the American and mostly English-language series Jane the Virgin in which he is currently playing an exaggerated version of himself, a Mexican telenovela star.)

Lastly, not a comedy, but a drama about drug-trafficking that was filmed in both Mexico and Spain, La Reina del Sur is also highly recommended by many people, although I have only seen a few episodes. You can buy the DVD set, which includes all 63 unedited episodes (42 hours!), but there are NO subtitles at all.  Supposedly there are English subtitles on the hard to find and expensive Blu-Ray version, however. Luckily, Telemundo still has 15-20 minute versions of the episodes on their Youtube account, with Spanish subtitles.

Previously on ielanguages.com blog: Ugly Betty Adaptations and Other Telenovelas for Language Learning