Apply to teach English in Spain through the Auxiliar de Conversación program!

Application available between January 9 and April 18, 2017.

This program is open to citizens of the US, Canada, the UK, Ireland, Australia, New Zealand, and English-speaking citizens from Belgium, Bulgaria, Finland, Luxembourg, Norway, the Netherlands, and Sweden. For the US/Canadian application, the main requirements for applicants are being a native speaker under 60 years old, being at least a junior in college or having a Bachelor’s degree, and passing a background check. You do not have to prove knowledge of Spanish, though you are supposed to have basic communicative skills.

All 17 autonomous regions of Spain and the autonomous cities of Ceuta and Melilla in North Africa now participate in this program, although Cantabria suddenly cancelled their program for 2016-17. Schools run by the Spanish Ministry of Education in Andorra – the country between Spain and France that is neither in the EU nor the Schengen Space – also appears to be an option as of 2017 but I couldn’t find any other information about it. 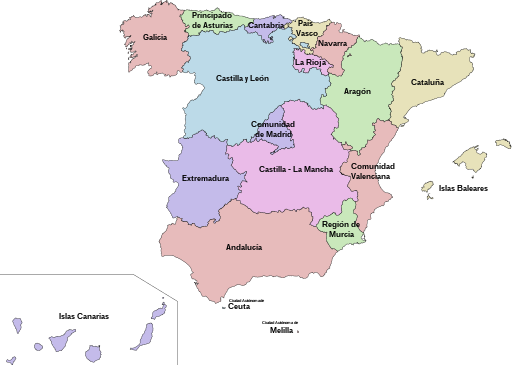 On the application, you first need to choose between Spain and Andorra. If you choose Spain, you can give your preferences for regions, but only one from each group. This means you cannot choose Madrid, Murcia, and Andalucía as your three choices since they are all in the same group.

Information and the application can be found at the official Auxiliares de conversación extranjeros en España site. Instructions in English can be found on the page dedicated to North American language and culture assistants in Spain.

There is no application fee to apply, but keep in mind that you will probably have to travel to your nearest Spanish embassy to get your visa. This program is essentially first-come first-served, so get your application in as soon as possible for the best chance to be accepted and to get your first preference of region. Renewing for subsequent years is also possible if you decide you want to Spain; however, you may or may not be able to stay at the same school or even in the same region.

If you have questions about the program or application, I suggest joining and searching the many Auxiliares de Conversación groups on Facebook.

If you’d like to teach as an English assistant in France, the application is open until January 15 for US citizens and February 15 for Canadian citizens. There are also other opportunities to teach English in Europe as well as in Latin America.

The application for the Teaching Assistant Program in France (TAPIF) for Americans and Canadians is now available at tapif.org

The Teaching Assistant Program in France offers 7 month English teaching assistant positions at public schools in France or the DOM-TOMs. The only contract is October 1 to April 30. Applicants must be between the ages of 20 and 35 by the start date and have a B1 level in French at the time of application. The US program also requires completion of 3 years of university/community college while the Canadian program only requires 2 years.

English assistants work 12 in-class hours a week and receive 790€ net each month plus have health insurance. Assistants assigned to the DOM-TOMs receive a higher salary because of the higher cost of living (however, assistants in Paris do not.) Travel to/from French embassies to obtain a visa, travel to/from France, and housing in France are NOT provided. Assistants can also renew for a second year, but a new visa is required.

Read all about my personal experience with the Teaching Assistant Program in France and get helpful tips and advice at my TAPIF guide. You can also download all the lessons I created for my French students (as well as international students in the US) at Free ESL Lesson Plans.

Speak another language besides French and want to teach in Europe?

If you would like to teach English abroad on an official program, but do not speak French, you can also try the similar Spanish program if you want to go to Europe. You do not have to prove your level of Spanish so it is possible to apply with a very limited knowledge. The contracts are 8 months long (October 1 to May 31) and the pay is 700€ net for 12 in-class hours outside of Madrid or 1,000€ net for 16 in-class hours in Madrid.

If you speak German, try the US Teaching Assistantship at Austrian secondary schools.

If you speak Italian, try the Study Intercultural Training Experience to teach English at schools in Lombardy.

Want to teach English abroad but don’t speak another language?

In South America, Colombia and Chile have also recently begun similar programs to bring in native or near-native English speakers to help teach in public schools. These programs are classified as volunteer programs, however, so the monthly stipend is much less than the European programs and require more hours of work per week. Neither country requires knowledge of Spanish before applying. They also have a different academic year than Northern Hemisphere school systems, so the contracts typically run from January or March to November for a full academic year. There are one semester options as well if you only want to commit for 4-5 months.