Swearing is another cultural concept that is difficult to master when learning a language. Exact translations among swear words are hard to come by since a lot of the meaning depends on the situation and tone of voice. What is considered vulgar in one language may not be in another. In French, merde is usually translated as sh*t in English, but it can also mean good luck or break a leg when talking to actors, and kids don’t get in trouble for saying it. American kids would be grounded or get detention for saying the s word. So should we really say that it means sh*t in English? It certainly doesn’t have the same impact in both languages.

In fact, swearing in French is much less obscene than in English – which is perhaps more detrimental to French students learning English than vice versa. There are many more degrees of vulgarity to English swear words and when we should use them or not, which is something that was unknown to my French students.  Since censorship on television doesn’t exist in France, the idea that certain words are bleeped out on American TV is a bit odd to them. Of course, censorship of nudity is also odd to them – Janet Jackson fiasco, anyone? – but that’s another story! 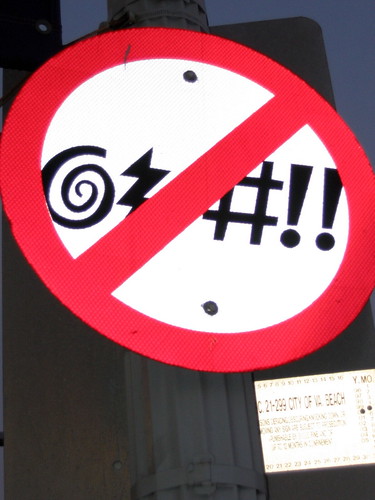 I tend to classify swear words in English by the situations where they would be censored or not and if children will get in trouble for saying them (but again, that can depend on the school and parents.) In my dialect of English, this is how I would describe the following phrases expressing indifference:

Now in French, it is difficult to give exact translations for each phrase so let’s group them according to vulgarity:

There can be some overlap with these phrases as well, depending on who you ask. David says Je m’en fiche and Je m’en fous are essentially the same thing to him and he doesn’t feel that one is particularly more vulgar than the other. And for less vulgar synonyms that replace foutre, such as J’en ai rien à cirer, where should we place them in the spectrum? Are they still considered vulgar or merely informal?

The verbe foutre itself presents the same problem as merde. Originally it had a very vulgar meaning, but nowadays it is used so often and with various banal meanings, that it is no longer as shock-worthy as it used to be. Can you imagine if English f*ck could also be used informally – without getting in trouble for saying it or being censored on TV – to mean to put/stick/shove/throw something or to do something?

Où t’as foutu les clés ? Where did you put the keys?

Qu’est-ce qu’il fout là-bas ? What is he doing over there?

More examples of foutre and the adjective foutu and their approximate English translations:

I will be updating the Informal French & Slang page soon to include more examples of swear words and in which situations they can be used. When in doubt, it’s best to try to use the most neutral expressions as possible so you don’t offend anyone. And if you do say something wrong, you can always play the non-native speaker card. I was once told by a two year old that I shoudn’t say dégueulasse because it was a gros mot. I thought it was just a slang form of dégoûtant (disgusting) and it didn’t seem that vulgar to me. But since I didn’t speak French that well back then due to a lack of exposure to authentic language and culture, how would I have known?