Since I work from home at the moment, I haven’t been going out most days because 1. the weather has been crap until about 2 days ago and 2. I’m slightly anti-social, so living in Europe with its high population density stresses me out. And usually when I do go out to accomplish some mundane task, something ridiculous happens and I wonder if it’s France getting back at me for loving Germany more or if it’s just a natural inclination of mine to end up in strange and awkward situations.

Right after I got home from traveling, I needed to run to the post office to mail the rest of my postcards and presents. If you didn’t get a postcard from me, either I didn’t have your address or France didn’t want you to receive it. And I hope the 4 people I sent the presents to actually received them or my 2 hour ordeal in the tiny post office of downtown Chambéry was all for nothing. 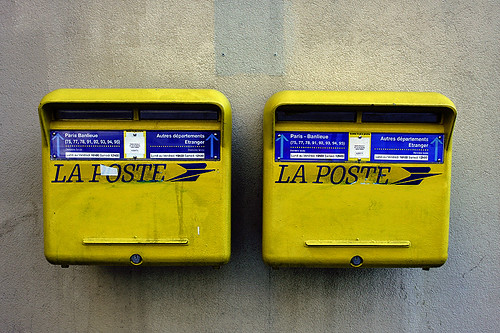 I hope the boîte à lettre did not eat all of my pretty postcards.

I only live 5 minutes from the main post office, which is actually open between 12 and 2 PM – a rarity even in a “large city” such as Chambéry, with its massive 50,000 inhabitants. I thought I would be able to run this errand in a few minutes and get home before the storm came in and go back to lying around watching L’Agence Tous Risques because I was still too sick and tired to do anything else. So I grabbed my jacket and the 4 packages and dashed outside, noticing that it was in fact already raining and I should have probably brought my umbrella. But the post office is only a few blocks away, right?

Right. Except when I get there, I notice signs posted all over the walls and windows that this particular branch is closed for construction until June 29. Of course.

It starts raining harder as I try to figure out where the other post offices are. Of course x 2.

I reach into my pocket where I thought there was an entire packet of tissues, but only find one slightly wet kleenex. Of course x 3.

I shove the packages under my coat and start running towards the downtown pedestrian area, hoping that none of my former students are out and about. They already think I’m the weird American who can barely speak English anymore (remember Do I still speak English?) and I really did not want them to see me with a runny nose, unbrushed hair, and a bulging coat like I had just shop-lifted something.

Finally I find the tiny office and go inside to see 9 people waiting in line. A woman asks me why I’m there, and I respond intelligently “to send some mail.” She asks how I’m going to pay, and I say “with my bank card?” almost as a question because I have no idea why this strange lady is so nosy. Then I realize she actually works there and is trying to get people through the line as quickly as possible. A fonctionnaire who is helping customers in a timely and orderly fashion? What? Am I still in France??

She wants to know what I’m sending, and of course I forget the word for fridge magnet (oops, just spoiled a gift) and can only think of aimant, which does mean magnet, but not a fridge magnet. I explain it’s for the frigo, and she says ah, un magnet. ::facepalm:: I need to stop forgetting that French nowadays is just English spoken with a French accent. 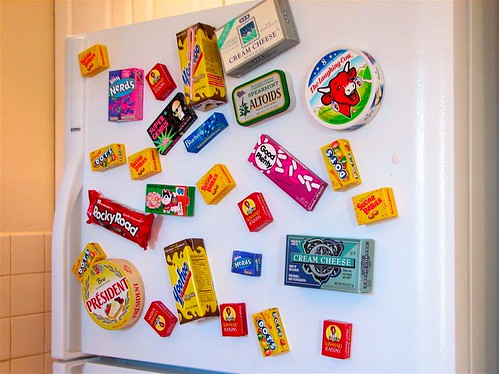 These are magnets in English or “magnets” in French.

She informs me that I can use the automatic machine to weigh and print shipping labels for my packages, so I don’t need to wait in line. She even stands next to me and helps me choose the correct buttons on the screen. I weigh all 4 packages and pay with my card and I think everything is working like a charm, until the machine spits out one of the four labels I need and then barks at me “transaction interrompue” and won’t give me the rest of the labels even though my card was debited the amount for all four.

Um, ok. The woman has no idea why it didn’t work and even apologizes for leading me to the machine because it’s just wasting my time instead of saving it. I look back and still see 9 people in line, albeit 9 different people, and sigh. This is going to be a long day. And my one kleenex is not going to last much longer.

Another postal worker comes out to help but he can’t find the right key to open the machine. Third postal worker tries to help but he doesn’t have the code to punch in the machine to put it into maintenance mode. Finally fourth postal worker gets the thing open, but can’t figure out why the labels didn’t print. The woman is busy writing a note on official La Poste paper stating that if my card had been debited the full amount even though only one label had been printed, I could come back to the office and try to get it sorted out.

Number four asks me a bunch of questions about what buttons I pushed, and it becomes clear that he has no idea how the machine works. He thought it was only for buying stamps.

Number three returns and seems to be a little more knowledgeable about this mystery machine from the future, but doesn’t understand why I was weighing four different packages. He thought you could only do one package at a time.

I just stand there with my kleenex in one hand and the packages in the other. Is this really happening?, I ask myself. I know more about La Poste’s machine than the people who work at La Poste. And then I realize Why yes, I am still in France. The familiarity of the “everything in France ends up becoming a strange and bizarre adventure that I will never forget” feeling begins to set in and I’m surprised I haven’t been given the Gallic shrug yet.

But eh, whaddaya gonna do, right?

The machine seems to be functioning again, so I decide to weigh the remaining packages and hope it works correctly this time. Number three stays next to me, presumably so he could help me, but I really think it was so he could learn how to use this new and exciting technology.

Finally, everything works perfectly and it prints the labels and accepts my card and I’ve taught a fonctionnaire how to use a stupid machine. I hand over the packages to the woman because she is the only one that I trust and wish an old lady who wanted to buy some stamps from the machine bon courage as I leave. Now all I have to do is check my bank statement and hope La Poste didn’t charge me for 7 packages instead of 4 so that I don’t ever have to come back to this place ever again.

Walking home I was so grateful that my level of French is near-fluent because I think I might have just started crying dealing with all of that ridiculousness in any other language.

And that pretty much sums up every encounter at a French store/pharmacy/bank/post office/train station/anything located outside of my apartment that I’ve ever been in. It’s like one big series of bizarre events after another. Like the time the bank lady said she didn’t know how to do a cashier’s check or where to find them even though I needed it within 2 hours so I could buy my car or when we needed to buy a new box spring and had to drive the scary minivan that we rented from the mafia men or every single time I have ever stepped foot in the préfecture. I’m on residency card #7 in less than 4 years, mostly thanks to screw ups by… you guessed it, La Poste!

So other expats, is it me or is it France?